There were no other cars in the parking lot when I arrived. I waited, hoping others would show up, too. I sure as hell didn’t want all of the attention to just be on me. Should I just go home? Did I really need to be here? Would it do any good anyhow? But I was pretty desperate. I had gone to all of the doctors. I had gone to physical therapy. I knew I had to try.

Approximately 2 months earlier, I had been in a car accident where a semi-truck shoved my little Prius across a 6 lane highway (click here if you missed the last post). While I counted myself incredibly lucky to not be more seriously injured, a tailbone injury was not exactly what I would call no big deal. In fact, I would have readily traded it for a broken leg (which I’ve had before so I can say that)! 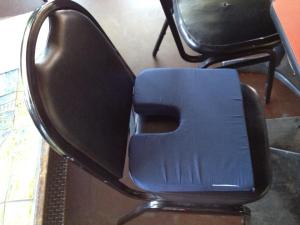 do with you. My first doctor didn’t even totally believe the amount of pain I was in, but luckily referred me for physical therapy. For the first couple of months, I could not sit down at all without using a cushion that is made specifically for tailbone injuries – there is a small chunk of the cushion missing and that’s where your tailbone goes so that nothing pushes on it. Of course, none of my doctors or physical therapists even told me about this miracle cushion – I found it on my own through google searches. When I bought it, I realized that my grandma used to have the same one. Ugh. And here I was, at the age of 28, sitting on cushion used by senior citizens.

Even with the cushion, I would be uncomfortable if I sat for more than 30 minutes but at least it made my life bearable. Mostly, though, I tried not to sit at all. I stood. All the time. Everywhere I went, people would offer for me to sit. Even at the doctor’s office where they knew I had an injured tailbone! You don’t realize how uncomfortable people are with standing until you are the one that can’t sit down. Everyone will tell you to sit. “Make yourself comfortable!” they say. I’m comfortable standing, thanks.

I carried my cushion with me almost everywhere. To friends houses. To restaurants. To weddings. To my new job as a teacher at a high school! Mortifying.

While the physical therapy certainly helped, I was by no means healed. The doctors told me that tailbone injuries can take a long time to heal. We agreed that I would continue to do my physical therapy exercises at home and take yoga classes. In addition to the tailbone injury, I was also still suffering considerable pain from dental work that had been done several months previous but continued to plague me (more on that in Inspired Nation #2a).

Yoga wasn’t new to me. I had been practicing somewhat regularly for the past couple of years. But I knew that my tailbone injury would prevent me from being able to do everything that I normally did. Even Warrior One was painful. I needed a class that had a slower pace and was more focused on alignment and modifications for people with injuries. I figured a “Back Care” yoga class would be good since my physical therapist had assigned me the same routine that he assigned to people with back injuries.

So there I was in the parking lot of the yoga studio trying to figure out whether to go in or not. I didn’t want to be the only one and have the instructor focus only on me! I didn’t even want to talk to anyone. I found it hard to explain myself and my injuries. Chronic pain has a way of making you want to hibernate or at least hide. I knew I needed to do yoga, but I at least wanted to hide in a crowd – even a small crowd. At last, though, another car pulled into the parking lot, giving me the motivation to go in. I wouldn’t be the only one!

By the time class started, there were several other people sitting with us, seeking salvation. What we found was a bridge. Leading us over the choppy waves of chronic pain.

Joanne was the teacher of the class, and before focusing us with a mantra of “Om,” she welcomed us and made us all feel understood by telling us about her own battle with chronic pain. She had been in a car accident as well, but had to have 15 surgeries! She told us that yoga had helped her to put her body – and her life – back together. She told us it was okay to not be able to do all of the poses. It was okay to feel broken. She validated my pain. She understood how it affected every single minute of my life and how miserable it was. She welcomed me.

And we practiced. Yoga is absolutely incredible for chronic pain and stress reduction, especially with the right teacher in the right environment. Joanne took us through challenging poses, but at the same time, helped us to modify the poses as needed. She knew that we all needed to feel comfortable and be allowed to play it safe. Yet, at the same time, she challenged us to work towards hand stands and full wheel – but in the right way, with the right alignment. Having a teacher who can build through a class and give alignment cues at the right time in the right way is absolutely critical for someone with an injury. And she knew that. During savasana that first class, tears silently streamed down my face. I found my place. Acceptance.

Joanne, and yoga, helped me survive that first year of pain and stress. It wasn’t a magic bullet, but it got me through. And sometimes, you just need someone to help you get through it.

In the past couple of years, Joanne has continued to practice and teach and inspire. Currently, she teaches “Intro 2 Yoga” and “yogahour” classes at Yoga Oasis in Tucson, Arizona.