After our 10-year-old bulldog Domino died, I started looking around for hobbies or something to take my mind off the hamster wheel of stress and worrying about grad school and future job prospects. A dog forces you to be active and present in the moment – because said dog will drive you nuts if it is bored or if it doesn’t get enough exercise. Without a dog, I found myself doing much more tv-watching, playing on my phone, or drinking, or more likely, all 3 at once to distract my mind from its anxious tendencies. I knew I needed to find something active, but fun and different from all the shit I normally do.

Maybe I should join a kickball league! I thought. I really liked kickball when I was 9. And wouldn’t drinking while playing make it just that much more fun? Well fuck yeah, it probably does, but do you know how much it costs to join a kickball league? An ungodly $95 – and that’s only if you purchase early! And know how many games you get? 6. Six! I’m not sure what price I would be willing to pay, but that certainly wasn’t it. A few weeks ago, my choice was reaffirmed when I saw a volleyball team (which couldn’t be that different from a kickball team) finish up a game and then play a sad, quick game of flip cup with I’m sure the equivalent of Bud Light before parting ways with barely a conversation between any of them. No thank you. I’m a grown-up and I like to savor my 7% alc. fancy craft beers while having lengthy conversations about politics or education or science or something meaningful in a not-too-busy, definitely not-too-loud hipster lounge.

Maybe I should start playing my violin again! I was a pretty decent player during middle and high school. And I lugged it across the country with me, twice! Thought about selling it multiple times, especially when money was low, like in 2009 when no one could get a good job, and I used my college degree to get a fancy pizza-serving gig at Costco. Or right before we moved to NYC last year, and I wasn’t sure how any of it was going to work. But for whatever reason, I held on to it, year after year. So yes, I should definitely play my violin again! I especially believed it after student pricing allowed us to see the Boston Symphony Orchestra at Carnegie Hall. Maybe if I practiced enough, I could join a community orchestra or a bluegrass band! All I needed to do was take my violin to someone who could stand the bridge back up (or replace it if necessary) and string and tune it. That’s it. But you know goddamn well my violin is still sitting there, gathering dust under the bed.

Maybe I should do some kind of art project! Nothing that takes too much practice or skill like the cool shit my friend Krystal makes. I need something easy.

My husband and I managed to make a mini-cornhole game out of cardboard boxes, paper, and old t-shirts during the only major snowfall in the city this winter, which upped my confidence level on the artsy shit for sure. So after some looking around online, I decided I wanted to transfer photo prints to wood.

It really doesn’t look that hard and seems like a fun task to me. Just enough planning and thought involved to be somewhat meditative. If I already had all of the items to do this project, I’ll bet I actually would do it. When we made the mini-cornhole game, all we had to buy was corn for the beanbags. It was perfect. But, as it turns out, I don’t have any of the items I need to make wood prints, so I’ve pretty much accepted that I’m not going to be making them anytime soon.

But I did finally find a new hobby! To fill the mind-space and time that used to be taken up by Domino….

We got a foster dog! 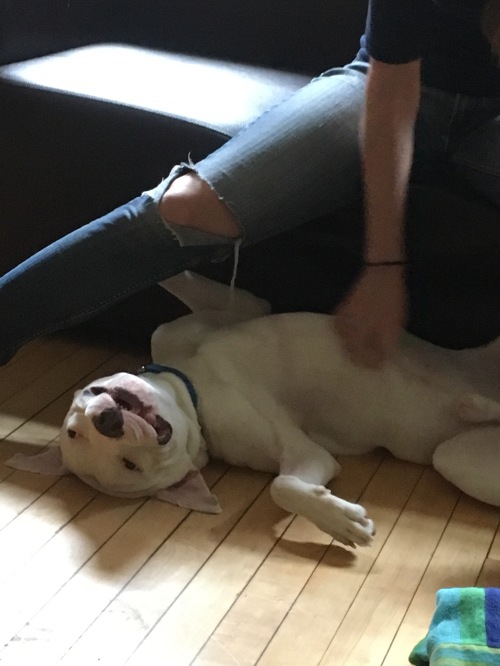 About Dean (our foster dog):

If you live in the NYC area and are looking for a big sweetheart with puppy energy, this 1-year-old (or maybe 2-year-old depending on who you ask) is still looking for a home. We think he would love to have another dog to play with in his new home, but mostly, he needs someone who enjoys petting dogs and rubbing their bellies, and who will take the time to walk him and train him.

You can see in the video that he does a great job on the leash if you are assertive and take the time to work with him; but if you’ve never had a dog before or trained a dog before, you will have a steep learning curve with this big ball of muscle. On the plus side, he is house-trained, super friendly to everyone, and doesn’t bark unless he sees something unfamiliar and scary. He does great in an apartment and doesn’t even have to be crated when left alone. To adopt him, click here!

Once Dean gets adopted, I’ll probably be back on the hunt for a hobby, though. I’d love to know what other people do. Leave me a comment with a suggestion!

5 thoughts on “Where did all my hobbies go?”