In our month on the road, there was a lot of rain. We should have known. On our first night of the trip (read here), we were battered with wind and rain outside of Grand Canyon NP. Our first night in Yellowstone surprised us with a thunderstorm so loud it even scared Domino (read here). But the rain in Glacier did us in.

We had been watching the forecast, and definitely knew the rain was coming. It was our first night camping in Apgar campground where we had secured a spot for 2 nights. (The camping regulations here were much more lax than in Yellowstone/Teton, and we only had to purchase 1 campsite for 2 tents and 2 cars.) On the first evening, we were happy that the rain held off until we had finished cooking Minestrone soup on the fire, which was lucky because we didn’t get our fire going until at least 6pm even though C’s parents had been at the campsite since 4 (and had been trying to start the fire since 4!). These are people who moved across the country in order to live next to Yosemite NP so that they could go whenever they wanted. They have all the gear. They’ve been to all of the best national parks. They spent a few months road tripping the National Parks just a couple of years ago. But somehow, building a fire is still a bit of a mystery to them. To be honest, I love it when people struggle with building a fire because that means I get to build the fire. I was a girl scout and was raised in a home heated by a wood stove. I got this. C always lets me build the fires.

Just as we finished eating, the rain started. We climbed in our tents and enjoyed listening to the rain patter down as we drifted to sleep after a perfect day (read about our day 1 adventures here). But the rain didn’t stop. It rained hour after hour throughout the whole night. It was still raining at 7am, and the water was starting to seep through our $40 tent that we had been praying would just make it through the trip. There would be no more sleeping. After putting some towels down along the edges of the tent and moving all of our stuff to the center, we dashed to the car. Domino was the most unhappy of all of us.

The rain didn’t show any signs of letting up, and we decided the best thing to do would be to drive to the other side of the park. Maybe it wouldn’t be raining over there. But as we drove, we started realizing that hours of rain coursing down mountainsides is exactly what Glacier is all about. There were literally waterfalls everywhere we looked.

There was a small break in the rain (or rather, it was only drizzling) when we reached the top of the mountain where Hidden Lake hike is. C and I debated on whether he should attempt the hike (as I stayed with the Domino) with the likelihood that the rain would start up again, but ultimately, we decided it was worth an attempt at least. Maybe the rain would hold off for an hour….

C only lasted 15 minutes on the trail. The temperature dropped to 39 F and the wind and rain were back, as was C.

So we drove onward. When we finally caught some blue skies, we stopped to buy coffee and get some hot water from the market to make our instant ramen for a cheap lunch (yes, there are a few places with services and food in the park). Then, we continued on and drove over to Many Glacier. After everything we had seen, Many Glacier was a bit disappointing in the rain. It was still drizzly and super cold/windy, so hiking was still out. I’m sure if we could have done the hike back there, it would have been more impressive. However, the chance of bears might be more prominent in this less traveled area of the park – for better or worse. 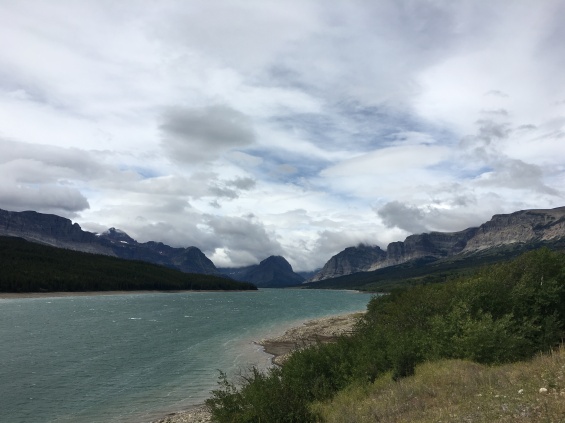 When we came up on a group of cars all pulled off the road and saw the tourists all clamoring with their cameras, we knew there had to be a bear. And since I’m a tourist, too, I pulled over and jumped out. I crossed the road to join the people with the cameras, but as I neared, a large grizzly lifted its head out of the grass and looked straight at us. It couldn’t have been more than 50 feet away. Luckily, my instincts are right, and without hesitation, I turned straight around and went back to the car. Fuck that shit. I am not about to get eaten by a bear nor watch some asshole tourist use bear spray on a bear when it’s the tourists job to maintain a safe distance and not spook the bears. Don’t be an asshole tourist. Don’t be the reason that a bear gets killed in its own natural habitat. This was the second time on our trip that I saw tourists getting too close to bears without a second thought just so they could get a good picture (read about my Yellowstone experience here).

Luckily, when we drove back out of Many Glacier, there was a park ranger managing the tourists and the bear had moved much further away. So we were safe to stop and admire the bear. The pictures weren’t worth taking or saving. Check National Geographic if you want a bear picture.

Though the rain had let up for a few hours, it was projected to start again by 5 and not quit until the following day. The thought of hiding out in a leaky tent sounded like disaster (and colds) waiting to happen. We needed to find a hotel. There weren’t any vacancies at any of the hotels in the park, so we decided to go back to Kalispell even though it was a full 2 hours drive back. But at least from Many Glacier, we were able to take the southern route back to Kalispell so that we didn’t have to drive back through the park. 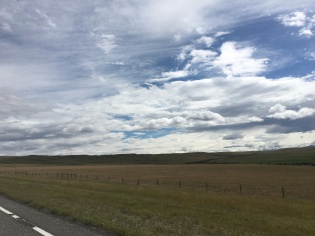 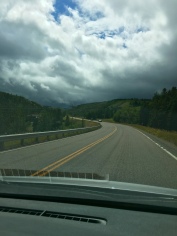 All in all, we were in our car about 8 hours; of course it was worth it, but it felt wrong since we didn’t make any “progress” across the country. My back pain flared up, and I was happy to be able to do some yoga in the hotel room before crashing into a bed that night.

2 thoughts on “When the rain won’t stop”