Grandma Mickey was bold and outspoken. She went to the hairdresser on a weekly basis to have her hair permed and dyed a vibrant red. Looks were important. But living voraciously was even more important. Grandma Kaufman, in contrast, was more reserved and strict. But out of her quiet strength grew a family that knew the value of hard work and perseverance. Both of my grandmas taught me to love above all else and find something worth living for. In the spirit of Mother’s Day, I decided to reflect on some of the lessons I learned from the matriarchs of the family.

Sleep naked. While Grandma Mickey was an elephant-collecting, flag-waving, conservative Republican, she most certainly was not the epitome of a traditional 50’s housewife. I knew she was outspoken and that we learned “bad” language from her, but I didn’t learn about the sleeping naked rule until well after my grandma had passed. Just before my wedding in 2010, my aunt wrote me a poem as a gift: 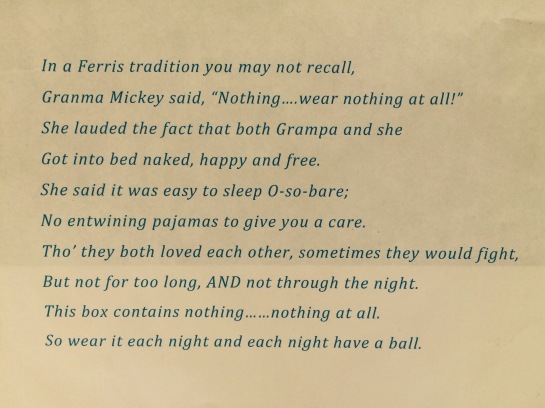 Even if you never cook anything, learn to cook one specialty dish. The only “food” that Grandma Mickey ever fed us was ravioli from a can (best sick day food ever, I might add), grapes, and donut holes from the grocery store. Despite her lack of culinary skills, she learned to make a mean chocolate cake. The best really. Every birthday. Every holiday. Every special occasion. Cake. Everyone should have a specialty. A delicious specialty.

My Grandma Kaufman, on the other hand, taught me that home-cooked is always best. If we were going somewhere for dinner, it was Grandma and Grandpa Kaufman’s house. Nothing came out of a box or a bag. Even pickles (the best pickles) were homemade.

When you have 12 donut holes, you should share. Translation: Don’t be an asshole.

Never park next to a 2-door car. Unless, of course, you don’t care about dings in your door. The only ding in my car door is from a shopping cart that rammed into my car with a gust a wind. Grandma didn’t warn me about shopping carts in the wind. 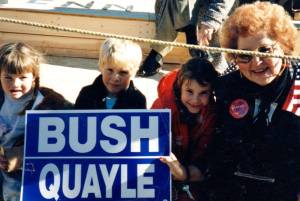 Vote, vote, vote. While Grandma Mickey and I would most definitely disagree on many political/social issues if she were still alive today, she taught me the importance of getting involved in issues that you care about. If you’re standing on the sidelines, you are part of the problem. Grandma Mickey took me and my siblings to our first political rally – OMG child propaganda.

Be bold. When I was little, I was mortified that Grandma Mickey had red hair. Why couldn’t she be the cute silver haired grandma that everyone else had? I would shrink down in my seat in the car when driving near my 7 year old classmates so that they wouldn’t see me riding with this crazy lady who wanted to stand out from the crowd. It didn’t take me long to realize, though, that this bold woman had a following. Everyone loved her. And some of the best moments of my life have been when I feigned confidence and did something bold.

and did something bold.

Be Brave. My grandma Kaufman was diagnosed with cancer when I was about 8 years old. Pretty much as far back as I remember, she was battling. In the midst of her chemo treatment, my grandpa Kaufman and my siblings and I were in a car accident where I broke my femur. After 6 weeks in traction in a hospital and another 6 weeks at home in a half body cast, I had to learn to walk again. It sucked. But it sucked less when my grandma made a game out of building my strength while trying to maintain her own at the same time. She would “race” me from the porch to a tree in the yard – both of us walking at a toddler’s pace, but me getting stronger, and her getting weaker. Despite it all, I never saw her shaken. I never heard her complain. This doesn’t mean that she wasn’t angry, though. Another thing to learn. It’s okay to be angry. Life isn’t fair. Some people can smoke and drink for years and not get cancer, while others, like my grandma, might live perfectly healthy lives and still fall ill. But this is the life you’ve been given – by God or the universe or chance. You just have to live that life as best as you can with as much strength as you have to give. 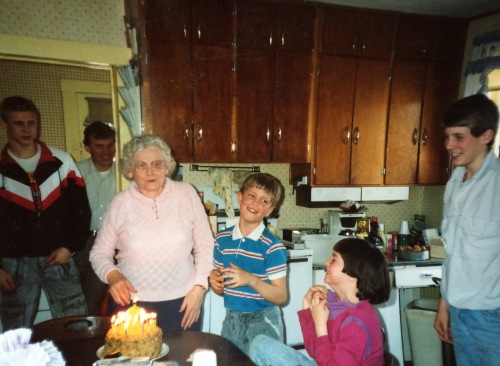 Travel. With others. By yourself. Just travel. You don’t need to have a spouse to live the life you want to live. Grandma Mickey loved to travel. Her independence was everything to her. Her husband died long before I was born, so I never got to see her in a relationship. But she was never waiting around for people to invite her to go do something or go on a trip. I have stacks of postcards that she sent us grandkids over the years from various states and countries.
Build the life you want at home. I don’t think Grandma Kaufman ever went on any trips as I was growing up. Maybe it was the cancer. Maybe it was money. Or maybe she never saw the need to go somewhere else when she had everything she needed on that farm out in the country.

Don’t hit the gas or the brake when driving over wet leaves. My grandma loved driving and taking us places – which of course, provided plenty of opportunities for her to teach us about driving.

Love, fiercely. Grandma Kaufman eventually had a hospital bed at home – in the living room, because she could no longer walk up the stairs. The cancer had come back with a vengeance, and we knew that her time was running short. But then, one night, she got up out of that hospital bed that had slowly been draining the life out of her body, and she walked around the house and sat with her husband. For hours, they talked and loved each other in a way that only two people who have been through so much and for so long can do. Both of them had difficult childhoods, as I imagine most children raised during the depression did. My grandpa pushed to get the blessing from Helen’s uncle to take her hand in marriage (it was the times), but admitted that they would have married each other regardless. There are no photos of their wedding day because no one was there to take a picture. They bought a farm, grew food, and raised animals and children. When my dad was little, my grandpa lost his arm in a farming accident. But they kept farming. They raised 4 wonderful human beings who went on to raise their own beautiful families. Then, Grandma Kaufman got cancer. And a couple years later, Grandpa missed a stop sign and caused a horrific car accident with us 3 kids in the backseat. And through it all, Grandma and Grandpa perhaps wavered, but continued to grew stronger. On that evening when Grandma found that strength to raise up from the grip of death, she and Grandpa talked about fear and life and death. And my grandpa, being very religious, recited with her the 23rd Psalm to bring comfort for both of them. They clung to that verse over and over, and she passed away in the night. But her fierceness and her love lives on in us.

Find Joy. Grandma Mickey was a singer. She frequently performed at various events in our little town, which only increased the number of people who loved her. I remember waiting backstage with her and feeling the building excitement in the joy of performance. All of the performers were doing what they loved. Find what you love. Find the excitement. Find joy.

Give “unbirthday” presents to lessen the gloom of suffering through a sibling’s birthday hoopla. I am not a parent, but I can imagine that giving a small gift to the sibling of a birthday kid might help prevent major meltdowns. Or if nothing else, everyone gets to be excited about the birthday.

As kids get older, give them cash not presents. Thank you Grandma Kaufman.

Be a decision maker. Why let others make the decisions when you could be the one making them? Grandma Mickey ran for – and won – the position of village treasurer and had a major influence in the town where she lived. I am typically an introverted, quiet influence on people around me. And I spent many years assuming that people in positions of power knew more than I did. Turns out, that’s not true at all. It’s usually the people with less knowledge but more confidence who jump in and make decisions. More of us who have a healthy sense of doubt need to step up the plate.

If you put your name on it, it’s yours. My family’s humor expanded out of necessity as my grandma Mickey gradually lost her senses (we thought it was Alzheimer’s at the time, but my mom says that it actually turned out to be an aggressive cancer – though by the time we knew about the cancer, Grandma couldn’t remember from day to day that she had cancer). Whether it was cancer or Alzheimer’s or both, over the years, Grandma realized that she needed to write everything down or she would forget it. Her house, and later her apartment, had legal pads full of scribblings about conversations she had, places she went, ideas she wanted to remember. She used her resources to hang on just as long as she could. And she wrote her name on everything – just in case it got lost. I have an umbrella that used to belong to her with her name on it. She even put her name on the leftovers that stacked up in her fridge. When we finally had to move her into a nursing home, this habit continued. And one day, the nursing staff found the lobby TV remote in Grandma’s room and told her that she needed to return it to the lobby. Grandma threw a fit and showed the staff that the remote clearly had her name written on it in black sharpie, so obviously, it must be hers. 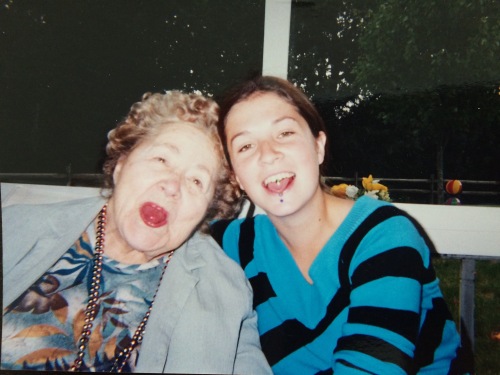 Happy Mother’s Day to all of the mothers and grandmothers! And a very special thank you to all of the women who have stepped up the plate when they didn’t have to. The grandmothers who are raising their grandchildren. The aunts, cousins, friends who are raising children who otherwise would have no one. The foster mothers and adoptive mothers who recognize that you don’t have to have the same blood to have love.

4 thoughts on “From the Mouths of Grandmas: For a Happy Life, Sleep Naked!”