Our frustration from the Jenny Lake hike fired up as we began planning the next day’s activities with C’s family, though Jenny Lake  never got mentioned. The general plan was to go to Yellowstone the next day, and we stayed up late drinking and debating different routes and options. The more we disagreed, the more we drank. We argued about what sites to go to, what time to get started, and how far around the park we should go. (Yellowstone is huge and it would take a whole day of driving to see all the “main attractions.”) C and I had little interest in spending any more time driving. C suggested that he and I split off from his family so that everyone could do what they wanted to do, but C’s brother did not want to split up since we only had one more day with him. So the debate raged on.

The tension had been building since sunrise that morning. We all got up at 8am (as we had planned) to hike Jenny Lake (read about that hike here). C and I dragged ourselves out of our tent and got ourselves ready. And then we waited… And waited… for everyone to be ready to go. Eventually C and I headed to the trailhead on our own, figuring they could just catch up with us.

When we got to the parking lot, it was already packed and cars were parked all the way along the street (it was nearly 10am at this point). We parked and purchased some jerky and mixed nuts from the general store while we waited for C’s family. They arrived shortly after, but had to use the restrooms and walk back to the car to get forgotten items. We didn’t get on the trail until 10:30, even though we had gotten up at 8 (why did we get up so early?). We tried to push it aside and enjoy our hike, but the frustrations grew throughout the hike with each misunderstanding along the way (again, you can click here to catch up). Suffice to say, the communication and planning surrounding that hike were lackluster at best.

By the time we were sitting around the campfire debating plans for the next day, all we wanted to do was avoid the wasted time and misunderstandings from the Jenny Lake hike. But instead of just saying all that, C kept saying we should split up because he needed alone time. And while that was probably true as well, it wasn’t the whole story, which made it confusing. Communication is hard.

We might have talked around and sidestepped the issues, but I will say that in the end, we made pretty specific plans for the next day. Instead of setting a “get up time,” we set a “leave time,” since different people need varying amounts of time to get ready. We agreed to start the day by hiking the Grand Canyon of the Yellowstone, which is the one thing that C was adamant about doing. Then we would drive to Butte Overlook which C’s family wanted to see before splitting up and doing our own things. One of those “things” was that I intended to find some wi-fi and write a blog post.

Unfortunately, we stayed up until 12:30am coming up with this plan. So the following day, we were all tired and somewhat hungover.

We did make it to the Grand Canyon of the Yellowstone, but C didn’t feel up to hiking it. And by the time the rest of us finished the hike and finished eating our lunch from the general store (the same awful deli sandwiches that are at every store in the park – pro-tip: bring your own food or get the salads which are far better than the sandwiches), it was 2:30 and the fatigue was hitting us hard. There was no way I could write anything worthwhile, so C and I headed back to camp. Our hours of drunk planning had mostly failed; however, we did all stick to the morning “leave time,” and we did make it to the Grand Canyon of the Yellowstone even though C didn’t hike it. And at least we were being more honest about the need for more specific planning instead of thinking that “winging it” would fulfill everyone’s needs.

Come back tomorrow to read about the hike itself and see pictures! I’ll leave you with a sneak preview pic: 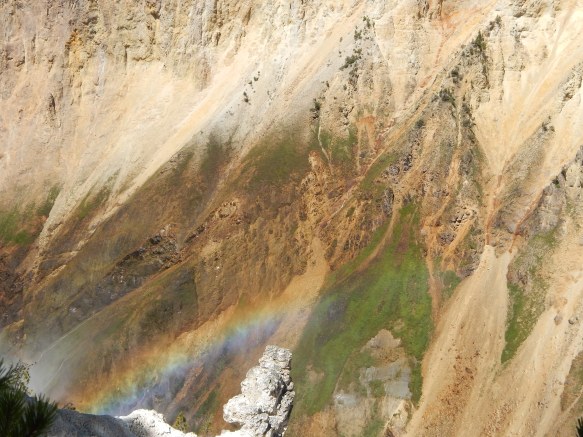