Thankfully, C’s mom watched our dog, Domino, so that C and I could hike together instead of alternating turns. The first hike (and best hike) we went on in Grand Teton NP was Jenny Lake trailhead to Hidden Falls and Inspiration Point. It is probably the most popular hike in the park, but for good reason! Get there early or hike in the heat of the day if you really want to avoid the crowds, but honestly, it was kind of cool to marvel in the beauty of nature with people from all over the world.

For a little solitude, hike the whole thing – most people seemed to take the boat shuttle across the lake which shaves 2 miles (each way) off the hike. We were happy to hike the relatively easy 2 miles without the masses of people. Even with our late start on one of the most popular hikes (we started hiking at 10:30), we were still able to hike in peace for that section of the hike (if you want more solitude in any of the parks, get there before 10am). From the trailhead, the hike winds through the forest around Jenny Lake and provides phenomenal views all around.

The hikers and the boat shuttlers converge at Hidden Falls, but on opposite sides. This gave us the opportunity to breathe in the falls’ energy and enjoy a snack without listening to any whining kids or being asked to take someone’s picture. 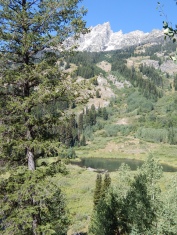 The hike from Hidden Falls to Inspiration Point is nearly a mile and climbs many switchbacks up the mountain. There are plenty of beautiful lookout points along the way, though, and I’m not convinced that you have to hike all the way up to get the best view. We had breathtaking views of Grand Teton – the hallmark of this park – up close. We even got to see some climbers being way more adventurous than we were.

At Inspiration Point, there is the option of continuing on to Cascade Falls which is only another .3 miles (uphill), but we had gotten a late start, and C and I were hungry and ready to hike back after a few pictures. But when we looked around to find C’s dad and brother, they were gone, and we weren’t sure if they had continued up the mountain or started back down. While there is cell phone service up there, they apparently didn’t have their ringers on. We were stuck in limbo. Hungry limbo, which is the worst kind. We sat there not knowing what to do and no longer enjoying the view. Hunger made us even more steamed about the situation.

After waiting 10 minutes or so, we told some fellow hikers to watch for C’s family farther up the hike and to let them know that we had started back down. As we neared the boat dock, we spotted them descending the mountain a few switchbacks behind us. We were glad to know they had gotten our message but were still too angry and hungry to wait for them.

We managed to enjoy the hike back as much as possible, but were very glad to finally reach the general store at the parking lot (at nearly 2:30) where we quickly snagged a couple of sandwiches and talked curtly to C’s family instead of just telling them we were upset. That wouldn’t come out until beers were in hand later.